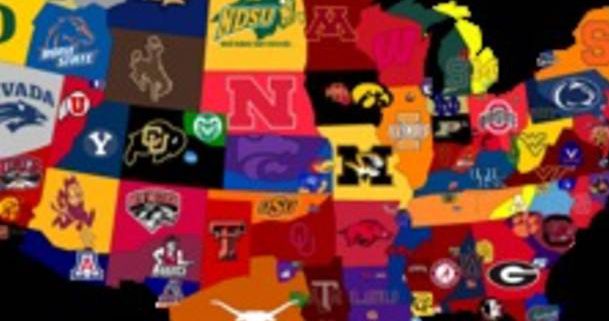 Did you know that the anniversary of the first official intercollegiate football game was this week? On November 6, 1869, Rutgers beat Princeton in the first of a two-game matchup. Princeton beat Rutgers a week later. This was the birth of college football, a culture that has since become a sacrosanct part of the college experiences of millions of students.

I grew up in the South, where SEC football draws bigger crowds than NFL games. College football is a major attraction in all corners of the country, but no one takes their college teams more seriously than Southerners. I’m married to a Georgia Bulldogs fan; his family members are all Georgia Tech Yellow Jackets fans; my brother is a Florida Gators fan. These rival team allegiances make for some interesting family dinners.

The annual Georgia-Florida game was played this past weekend, a rival game that is anticipated with the same fervor and excitement as the Superbowl, so it’s little surprise that I have college football on the brain this week. (Side note: Go Bulldogs!) The time seems ripe for an examination of college football’s effects on other parts of the college experience: Academics and affordability.

At a time when student loan debt has reached record levels, college academics and affordability have become a central focus in education policy debates.

In the absence of federal or state policies mandating lower tuition, what could colleges do to improve affordability and the quality of academics? Well, unpopular as the idea may be, they could consider eliminating or cutting back on football programs. Football is like the third rail of higher education — untouchable. But to solve the problems in today’s higher education system, perhaps we must at least consider redefining football’s role in college life.

“But wait!” you say. “College football programs bring in millions of dollars to support their schools!”

This is a popular argument in favor of large-scale college athletic programs, specifically football and basketball. And it’s true that ticket sales and other revenue sources do bring in money for football programs. But in 2012 just 23 of 228 athletics departments at NCAA Division I schools made enough money to cover their expenses. Of that group, 16 received subsidies from some combination of school funds, government funds, and student fees. Rutgers, for instance, spent $28 million more than it generated in 2012. They bridged the gap with $18.5 million from the school and another $9.5 million in student fees.

These numbers are for athletic departments in general. Admittedly, football programs far outperform other sports programs in terms of revenue. But it’s worth noting that even the NCAA admits that 43% of football programs lose money. Of those that aren’t losing money, most barely break even; only a handful of the biggest football programs actually generate significant revenue.

College affordability is just one part of the new national attention on higher education. The quality of education at the nation’s colleges has come into question with increasing frequency. In fact, a 2011 study suggested that nearly half of college students show no significant improvement in critical thinking, reasoning, and writing halfway through college. To address this concern, some colleges are using a new standardized test called the Collegiate Learning Assessment Plus (CLA+) to give employers a measure of graduates’ abilities.

College athletes often get the short end of the stick in terms of academics. The lower admission standards for talented athletes are well documented, as are the methods that many colleges use to keep underperforming student athletes eligible to play sports. Even non-athletes at big football schools often take a hit to their academics, with some studies suggesting that non-athletes see lower GPAs during successful football seasons. After all, tailgating isn’t exactly designed to encourage studying…

Read more: If Student Athletes Were Judged by Academic Prowess
Read more: Why a Football School May Be Wrong for Your Child

There are many arguments in favor of big football programs.

School unity and school spirit are certainly improved through successful football programs. Name recognition from big football programs does indeed draw an increased applicant pool and the potential for big alumni donations. And big football programs undeniably help local businesses by drawing huge crowds for home games. But is this reason enough for colleges to continue to focus heavily on athletics at the expense of affordability and academics? What are your thoughts?