Many people have forgotten the story of our national anthem – a true shame because it is a uniquely interesting tale.

In 1814, during the War of 1812, the British invaded and captured Washington, DC. Not satisfied with occupying our nation’s capitol, they decided to burn it as well. Leaving the flaming city behind, the Brits headed for nearby Baltimore, eager to light more stuff on fire. On their way, they passed through Upper Marlboro where a patriot by the name of Dr. William Beanes caused some trouble for the English by arresting several of their soldiers. One of the arrested British soldiers escaped and reported this incident to his superiors. The British officers weren’t overly pleased by this development, and so they returned to Upper Marlboro where they arrested Dr. Beanes. 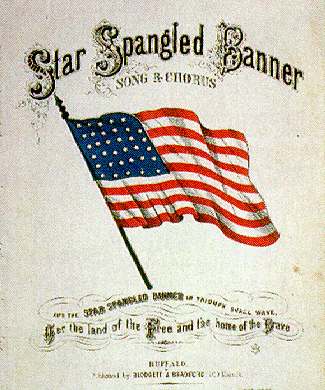 Dr. Beanes was a beloved resident of Upper Marlboro and the surrounding areas. When the local townsfolk were unable to secure his release, they sent for Francis Scott Key, a young lawyer in Georgetown. Key, who was a friend of the doctor’s, immediately set out for Baltimore with the intention of negotiating Dr. Beane’s release. Along the way, he was joined by Colonel John Skinner, a government agent in charge of arranging for the transfer of prisoners.

Meanwhile, Dr. Beanes was placed in the custody of the British Admiral Cochrane. When Key and Skinner reached Baltimore, they were escorted aboard the Tonnant, a British ship where Beanes was being held. The two men attempted to negotiate Beanes’s release, but the British refused. Finally, Skinner produced documents signed by wounded British soldiers testifying to the excellent treatment they received at the hands of the Americans. This greased the wheels and Cochrane agreed to release Beanes.

At this point, Key and Skinner, who had become aware of the British plans to attack Baltimore, were told that for security purposes they would not be allowed to return to land until after the Brits had completed their mission. The men were transferred to a smaller ship, but eventually the Admiral required this ship as well, so Key and Skinner were relegated to the small American boat on which they had first sailed. It was from this ship, anchored near the rear of the British fleet, that Key witnessed the British attack on Fort McHenry.

All through the night, Key watched with dread and fear as the British bombarded Baltimore. In the morning, when the first light of dawn revealed the American flag still flying above the fort, Key’s tense emotions found a release. As the British finished their attack, Key began to write the first words of a poem titled “Defence of Fort McHenry”, later retitled “The Star Spangled Banner”.

Read This Not That: Why Boys Don’t Read
Scroll to top