864%. That’s how much the cost of college textbooks has increased since 1978.

According to the College Board, the average student spends $1,200 per year on textbooks. Note the word “average,” suggesting that about half of students will spend more (sometimes significantly more) than that. That’s about 14% of the tuition and fees at a public four year college. That’s a sizable chunk of change.

Part of the problem with college textbook prices is a lack of competition, which is also felt in the K-12 textbook market. Just as “The Big Three” (Pearson, McGraw-Hill, and Houghton Mifflin Harcourt) control the K-12 publishing industry, the college textbook industry is also dominated by a small handful of giant publishers (including The Big Three). 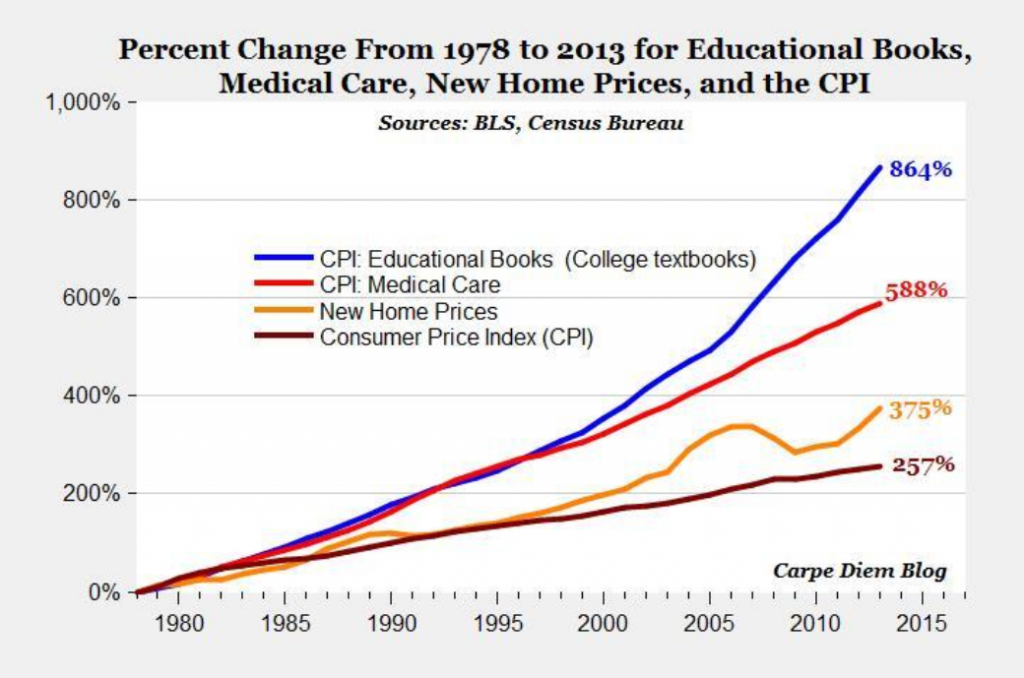 But another part of the problem is that the students who purchase these books have no choice in the matter. If the professor says, “Buy this book,” you sort of have to buy that particular book. Students don’t get to shop around to see if maybe textbook A is better than textbook B. They are a captive market.

No, when it comes to college textbooks, the purchaser doesn’t actually get to make a choice. The person making the choice is the professor, who doesn’t have to pay for the textbook and therefore doesn’t have to care how much it costs. Unless, of course, that professor is the author of a textbook, in which case he cares very much how much it costs because he gets a nice little royalty from every student who buys it. (And most professors are not nearly as nice as this New York Times Op/Ed contributor, who reimbursed his students for the royalties he earned by assigning his own textbook for class.)

Thus we have a situation in which prices keep rising, and students keep buying. What can you do about it?

Do not buy brand new books.
Guess what? Books don’t generally expire. They don’t get stinky (in fact, I rather enjoy “old book smell”). Unless your professor absolutely insists that you have to have the newest edition that JUST CAME OUT THIS YEAR, buy a used copy of the book. (And even when the professor does insist, you can often get away with using a slightly older edition with little inconvenience. They don’t generally change that much.) Get the ISBN for the book and search on Amazon, Barnes and Noble, book.ly, or half.com.

Rent the book.
Face it – your textbook will not be such a page turner that you return to it again and again to reread its beloved dog-eared pages. You’ll never look at the thing again. So why not rent your textbooks? Business Insider has a list of 7 sites that provide textbook rental or swapping services. It’s definitely an option worth checking out.

Price compare.
You do research and compare prices when you’re buying a computer, a car, or other big purchases. Why wouldn’t you do the same for textbooks? Shop around. Compare prices. And if you find that too onerous, use a comparison tool like SlugBooks or BIGWORDS to do the legwork for you.

Go digital.
Thanks to the internet, textbooks can also be found online. Taking an English Lit course? Lots of those classic pieces of literature are available for free at Project Gutenberg. And for other courses, check out a service like CourseSmart, created by five big textbook publishers to provide less expensive e-book formats of popular textbooks.

The library is your friend.
Many colleges provide copies of textbooks at the library. City and county libraries also often carry copies of some textbooks. A caveat: Those copies go fast, so you have to be the first one through the door to take advantage of this freebie.

Borrow or swap textbooks.
Students who took the course last semester will be more than happy to lend, sell (cheaply), or swap textbooks. Like you, they don’t need that bulky overpriced book hanging out in their dorm room. Check campus bulletins, Craigslist, and online marketplaces to find other students willing to lend, sell, or swap their books.

Sell those books back.
I love books. I love owning books. I have shelves and shelves and shelves of books. So I get the impulse to hang onto any book you’ve spent money on. But when it comes to college textbooks, unless it’s a book related to your major that you think you’ll need to reference again and again, don’t cling to the book. Sell it. And don’t sell it to the campus bookstore, where they’ll give you a tiny fraction of what you paid. Sell it through some of the used book vendors mentioned above.

Why You Should Take SAT Subject Tests NOW
Scroll to top